Few months back I learned from my friends about Cirque du Soleil and how they yearn to watch it using their saved money. They were really watching for this show to come to Manila and when they learned of the availability of the show they didn’t hesitate to book the whole family and buy theater tickets to watch this different kind of entertainment with circus. I heard nice reviews from their end and began searching about this particular show. Well Cirque du Soleil is a company that produces a mixture of street entertainment and circus arts in a very different dramatic way that people will surely love to watch. They’re based in Montreal, Quebec, Canada and founded by Guy Laliberte and Daniel Gauthier, street performers at that time. It’s an exciting show that will amaze you in a sense that you’ll feel a little nervous of what they’re doing but totally satisfied with the talents they present as well.

What makes this show a unique one is the combination of their circus styles from around the world, with its own storyline and central theme. There are no stagehands in their show as the performers itself changing the props as they do their performances. There are beautiful stories to watch for like Zarkana, the annual seasonal show in New York. This show features the story of magician who has lost his love and with her, his magic has disappeared. The story will go around when the magician begs for God’s help to return his love and he plunged into a world of surreal creatures. 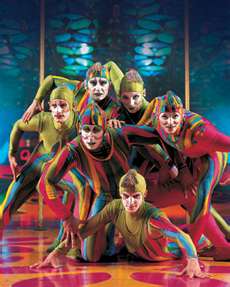 Another show which will be shown in California is the movie-themed permanent show titled Iris. This is about fantastic trip through the history of cinema and its changing genres. There are other shows that they’re working right now including that of The Immortal World Tour to be shown in North America. As from what the stories I’ve been hearing from my friends who have already watched this show every penny they’ve spent is worth the show. They’re now looking for discount Cirque du Soleil tickets as they really want to repeat their wonderful experience again of watching this beautiful, exciting and unique show. They want their kids to experience this awesome show so they’re bringing the whole family this time.

I'm a Mom with three kids juggling between my corporate work and online writing job. This is my site about gift ideas, deals, shopping and technology.
View all posts by race →
This entry was posted in arts and tagged arts, entertainment, recreation. Bookmark the permalink.